The Ensemble is Coming to the Beltway

December 22, the historic Ensemble Theater will be performing Black Nativity at First Met, The Place Where You Belong!  The performance will be in the sanctuary of First Met at 7 pm.  The tickets for seats can be obtained by registering online (Tickets can be picked up in the front office).  The $15 cost for the performance is being covered by First Met; thus the community can access this message of love for free. 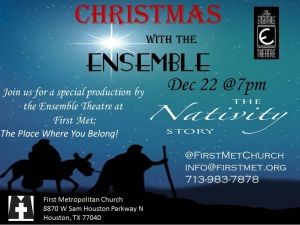 Black Nativity is a retelling of the classic Nativity story by writer Langston Hughes.  It contained an all -black cast, which performed traditional gospel style Christmas Carols, and a few additional songs that were written specifically for the show.

Black Nativity was one of the first plays written by an African-American, and was first performed on December 11, 1961.  The show has annually been performed in Boston, Massachusetts, at Tremont Temple since 1969.

The Ensemble Theater was founded by the late George Hawkins in 1976.  It was created to preserve the artistic expression and diversity in the arts.  The theater is over 35 years old, and has become one of Houston’s top historical institutions.